You know what’s sick? Me. I’m at home today because I feel like crud. Bleh.

You know what else is sick? This guy from last night’s So You Think You Can Dance:

If you think you’ve seen this type of thing before, make sure to watch at least up to 1:02 (2:04 on the countdown timer) because that’s just crazy. I mean, what is going on with his bones & joints?

It was also nice to see Hok back. He was entertaining as ever. I couldn’t find a video of him though. It seems like a bunch of the SickStep crew left to form Quest. Uh yeah. /fangirl blatherings.

ETA: More videos! This couple was from last week. Hawt! Especially the woman. Could the cameraman love her any more?

I loved that slow-mo thing they do (1:10 on the countdown timer). I hate Nigel’s unnecessary sleaziness though.

Stanislav’s sister is awesome too:

I feel like I finally “get” the appeal of this type of dancing.

My spring mix is already sprouting! And I just planted on Sunday. I am going to take a picture everyday to track growth. It’s another story as to if I’ll be posting them. Heh. I’m so lazy.

On a completely unrelated note, yesterday, when I drove in to work, I got 65.5 mpg. Nice.

On yet another completely unrelated note, we met with a third architect yesterday. He was very informative and helpful. Most likely, we won’t be able to afford him, which I think both he and we recognized, but he still gave us a lot of helpful tips and insight. That was pretty awesome.

Things on my mind

I can’t really fathom yet the wider implications of this piece of news beyond what the article states:

If and when the rail link finally opens, there are obvious advantages for both sides.

For South Korea, it would mean that goods produced using cheap North Korean labour, in a joint industrialised zone to the north of the border, could be more easily transported out of the country.

For the North, it would boost the tourist trade, providing a link to a mountain resort on the east coast popular with South Koreans.

– Via BBC News via Seppo.

I hold out hope that I will see the Koreas reunify within my lifetime, even as I fear the problems they will face in integration the two now-disparate cultures, which grew up for generations hating/fearing/disparaging/pitying each other.

When it rains, it pours

Not only did I recently get in touch with some long lost family, I just got an email today from a dear, dear old friend of mine! I am so happy to hear from him! Wheeeeeeeeeeeeeeeee!!!!!!

Update: He and I are apparently both wearing red chucks today, so I had to take a pic to post it. Because, you know… I don’t know. It would be kind of cute to read mini books then review them at length here. Instead, I am going to review my Seppo-financed book purchases for March and April. 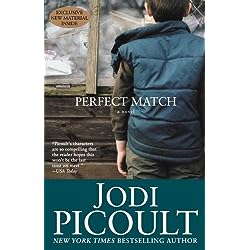 It’s a story about a district attorney of a small town whose young son is sexually molested. Years of seeing criminals go free and little kids become retraumatized by having to participate in the trials of their molesters makes her take the law into her own hands. This story covers both how things reached this point and how they proceeded from there.

As always, there is a little twist in Jodi Picoult stories, so I won’t go into detail there. The biggest failing in this story for me is that the main protagonist — the mom/district attorney — never becomes sympathetic. She instantly becomes an unrelateable caricature because Picoult does not give you sufficient time to dig into her character and understand who she is before the molestation of her son occurs. I understood the author’s need to establish the main crux of the story right away, but I felt that not having spent enough time in the “normal” part of the family’s life created a barrier that kept me from being able to see how the person who she was could have resulted from the person who she had been. Instead of walking down the path with the main character, I abruptly found myself face to face with a character who was, in my opinion, a monster.

The story itself was pretty good. As usual, it dealt with a subject matter that was interesting in and of itself, and how normal people would react to such a difficulty in their lives. There is a trial, as I’ve come to expect from a Picoult novel, but still is interesting for all its expectedness.

I was surprised by the twist, in the best way one can be surprised by a twist: it didn’t violate the “truth” of the rest of the story and looking back, I could see that it was a logical way for things to land, yet I found myself not having any idea things would land that way.

However, the real strength of her novels is in her characters. I found myself drawn to the supporting characters, but could not, for one minute, find a way to bridge the gap/lack of understanding and sympathy between me and the main character. Because of this, I would give this a 3 out of 5 stars. If this were my first Picoult novel, I am not sure I would decide to pick up another one.

Now this is what a light-hearted romantic comedy could and should be. Are you listening, movie people? The story follows Min Dobbs, a 33-year-old account whose mom will not leave her alone about losing weight so that she can squeeze into quite an unreasonable and ugly bridesmaid dress for her sister’s wedding, and who has just been dumped by a guy who thought she was plain but reliable but decided to dump her anyway for not sleeping with him quickly enough, and Cal, a grade A hottie/commitment-phobe who Min’s ex bets will not be able to get her into bed within a month.

Cal did not agree to the bet, but the situation is not helped by the fact that Min had overheard the bet being called out. From this very sitcom-y, zany premise comes a really cute, funny, genuinely heart-warming story about two people fighting not to fall in love with each other.

This was my first Jennifer Crusie book, so I had no idea what to expect. What I got was hilarity. It’s great, light, sit-by-the-beach type of reading, with an unconventional main character (not-so-skinny, wallpaper-y, 30-something accountant, of all things — heh to my accountant friend). I give it 4 out of 5. After this book, I decided that I want to read a lot more of Jennifer Crusie. 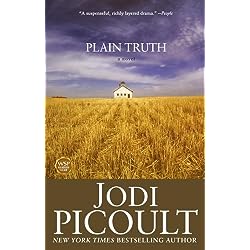 I am tired of reviewing already! This one was about the Pennsylvania Dutch (really, the Deutsch, but they are indeed called PA Dutch) a.k.a. the Amish. More speficially, it’s about the trial of an Amish girl who gives birth outside of wedlock after having hidden the pregnancy the entire time, and cannot remember what happened after she gave birth. The baby is found dead in the morning, in the barn.

I thought this book was a really well-written, solid book. The characters had depth, were sympathizeable, and behaved like, well, like people you know might. They felt very real, despite being very different in the way they lived. The Amish way of life is presented without overt judgment, showing both the good and bad way to this way of life, just as there are good and bad in the “normal” way of life.

Since I’m tired of reviewing and have one more book to go, I’ll end this by saying if you’ve enjoyed any of Jodi Picoult’s books, you will most likely enjoy this one. I’d give it a 4 out of 5. If this were my first read of Picoult, I’d definitely pick up more of her books as a result.

Jennifer Crusie’s Crazy For You.

This one is about a high school art teacher who seems to have a satisfactory, albeit unexciting and uncompelling, life. She’s with a man who’s made himself quite comfortable in her life and she thinks he’s good for her. The problem begins when he forbids her to adopt a dog she’s rescued. Going even further, he actually calls the pound and has them take the dog back, without her knowledge.

This incites her to wake up and realize that he’s been running her life and that she’s been complacent about what she actually wants from life. In a comical domino effect, this incites change in just about everyone else around her.

This was cute and highly entertaining, but not necessarily memorable. I’d have given it a 4 for entertainment while I was reading it, but now with a little distance, I’d give it a 3 out of 5.

I feel like I should come up with a better rating system. It’s weird that I’d give both Perfect Match and Crazy For You the same score, when I enjoyed the latter so much more. However, Perfect Match had a lot of solid elements, but fell apart with the main character.

I really want to get Lasik. I really don’t want to go blind either. I have to do some research and obsess for a while.

Do you like Motown-Era music? Do you like musicals? Would you like to know more about race-music politics of the 60s and 70s? Do you like to see films about people pursuing their dreams and ripping out their hearts and souls on the floor to make just a bit of it come to be? Do you love intricate choreography involving dozens of people at a time?

Loved it. Two solid thumbs up.

I met the entire North American Helava clan. That is, unless Seppo has some kids he doesn’t know about somewhere. Oh, the horror! 😉

It was a small clan, compared to mine, but the really awesome thing about them is that they are such an easygoing, laid-back group of people. While everyone was quite different, that was a common trait. The other one was their affinity for the word “goon”.

I was particularly amused by Seppo’s aunt’s affinity for high tech gadgets and cars. She and Seppo chatted over electric cars and MacBooks for hours on end. It was so funny.

Here is a kind of dark pic: I’m looking forward to hanging out with them again. 🙂